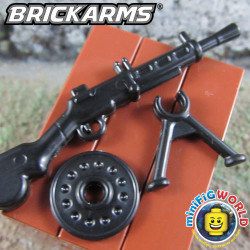 Lego minifig compatible Custom BrickArms DP-28 Machine Gun. DP-28, called the DP-27 in Russia, is a light machine gun firing the 7.62×54mmR cartridge that was primarily used by the Soviet Union, with service trials starting in 1927. The standard Soviet infantry light machine gun (LMG) during WWII, with various modifications it was used in aircraft as a flexible defensive weapon, and it equipped almost all Soviet tanks in WWII.