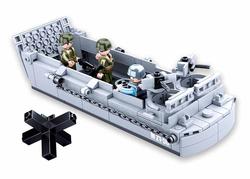 Sluban®  Higgins Landing Craft (BO855). Recreate the Epic Higgins amphibious landing craft used extensively in by the Allied Forces in World War II. Typically constructed from plywood, this shallow-draft, barge-like boat could ferry a roughly platoon-sized complement of 36 men to shore at 9 knots. This set is LEGO® Minifig Scale and compatible with LEGO® parts. New and sealed in original box and includes the following;