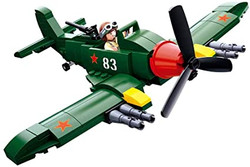 Sluban®  Ilyushin 2 Aircraft (BO683). Recreate the Epic Ilyushin 2 Shturmovik. This was a ground-attack aircraft produced by the Soviet Union in large numbers during the Second World War. This set is LEGO® Minifig Scale and compatible with LEGO® parts. New and sealed in original box and includes the following;