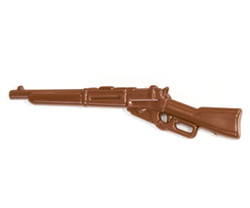 Lego minifig compatible Custom BrickArms Russian M1895. Between 1915 and 1917 approximately 300,000 M1895's were manufactured by Winchester for the army of the Russian Empire for World War I, accounting for about 70% of total production of the rifles prior to 1936 when the M1895 was discontinued. Model 1895 was the first Winchester rifle to feature a box magazine located underneath the action. Rifles made for the Russian contract had a longer than standard barrel fitted with an extended forestock and bayonet lug.