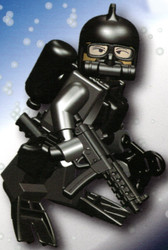 LEGO compatible Custom minifigure US Navy Underwater Demolition Team Gear Pack from Sidan Toys, Z7703. The Underwater Demolition Teams were a special-purpose force established by the United States Navy during World War II. They came to be considered more elite and tactical during the Korean and Vietnam Wars. Pack comes with all the weapons and equipment you need to make your US Navy UDT minifig.
Includes  the following;

Note a Minifig is not included.